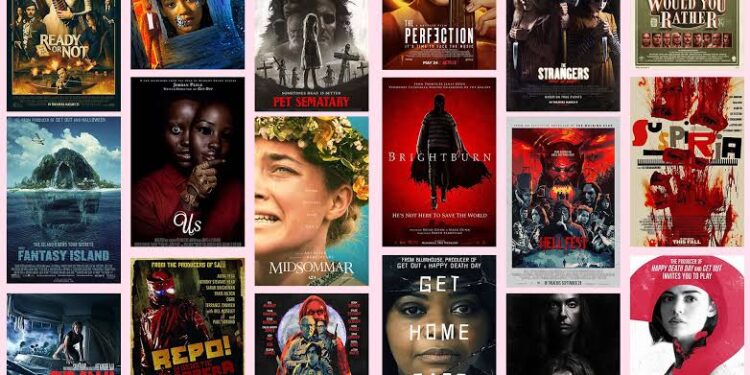 For those who like to celebrate Halloween, watching a good horror movie on the date is indispensable. Thinking of helping you in this choice, we’ve selected 10 movies available on Netflix that are the face of Halloween and promise to be very scary. A list that goes from classics, to adaptations and original titles of the platform. Check it out and have good scares!

First part of an original Netflix trilogy, Street of Fear is based on writer R. L. Stine’s book series. This first film covers events that occurred in the 1990s in the small town of Shadyside, when a tragedy brings to the fore the city’s dark past, marked by several murders, and triggers a persecution of a group of teenagers.

Film that gave rise to a franchise of feature films and a TV series, The purge takes place in an alternative reality in which the U.S. has managed to virtually zero the country’s crime rates. To this end, however, a law has been lowered that allows every year, for 12 hours, all types of crime to be allowed. It is in this scenario, during the “night of the purge”, that a family spends moments of terror, after sheltering a man in their home.

Mexican film, The Orphanage is produced by Guillermo Del Toro. In the title, a woman decides to return with her family to the orphanage where she lived as a child in order to reopen it as a residence for disabled children. However, strange events with her son and stories about the place’s past make her suspicious that there is something wrong with the property.

4. In the Tall Grass

Based on a work by Stephen King and Joe Hill, In the Tall Grass  is an original Netflix production. In the production, as they drive down a road, two brothers hear a little boy’s distress call from a thicket. They stop to help the child, getting caught in the bush, but soon realize that there are more people lost in the field, that time there seems to be going on in a strange way and that the exit seems increasingly difficult to be found.

5. Halloween – The Night of Terror

Classic title that could not miss in a list of movies to watch on Netflix during Halloween, Halloween – The Night of Terror gave rise to a string of feature films. Set in the fictional town of Haddonfield, he follows in the footsteps of a six-year-old boy who murders his sister with stab wounds on the date. Fifteen years later, already an adult and living in a psychiatric institution, he flees the scene and returns to his hometown, where he begins to pursue a student.

Supernatural terror, Voices is a Spanish film. In the plot, without knowing the reputation of the house, a couple and their son move into a new home in order to renovate and sell the property. Things begin to get out of control, however, when the child begins to hear strange voices on the property and, shortly thereafter, a tragedy is struck over the family.

7. The Exorcism of Emily Rose

Inspired by a true story, Emily Rose’s Exorcism revolves around a young Catholic, who goes to the big city to attend a university. A victim of increasingly frequent outbreaks, she seeks the help of a priest, accepting to be part of an exorcism ritual, which gets out of control and eventually causes her to die. Accused of murder, the priest goes to trial, being defended by a famous lawyer.

Polish production, No Connection takes place in a camp for young people who are extremely dependent on social networks and other technologies. In this place, to detoxify, they cannot have access to their cell phones, being divided into groups for a three-day experience in nature. Everything, however, gets out of control when one of the boys is murdered and the group splits in half, while being chased by a strange figure.

Netflix’s original title to watch on Halloween, Eli stars as a little boy with an autoimmune disease, who suffers from various allergic reactions when he’s outdoors and always lives on protective devices. In search of a better quality of life and a new treatment, his parents decide to take him to an institution, but gradually Eli begins to suspect that there is something wrong with the place when he begins to undergo painful experiments and experience paranormal phenomena.

Spanish feature film, Influence is adapted from a book of the same name. In the title, due to her mother’s coma, a woman is forced to return with her husband and son to the house where she lived as a child and of which she has bad memories. The forced return forces her to face a past she thought she had left behind and fight dark forces that go on to threaten her daughter.

And do you recommend other movies to watch on Halloween on Netflix? Share with us those who scare you the most!

How to download Google Classroom [PC, iPhone and Android]