Today is April 1 and is also the annual April Fool’s Day. In addition to the “Animal Language Translator”, Huawei also officially announced a super-conscious collaboration screen with more technological attributes. 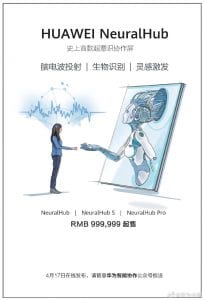 Judging from the poster, this first ever super-conscious collaboration screen supports brain wave projection, biometrics, and inspiration. The “sale price” starts from 99,999 yuan. This product is also one of Huawei’s tidy activities launched on April Fool’s Day, but Huawei also announced that it will officially release the Huawei Enterprise Smart Screen on April 17.

In contrast to the “hypocritical” super-conscious collaboration screen, It has been previously reported that Huawei has officially announced another flagship new Huawei smart screen product. Compared with its predecessor, this product has a larger front camera recognition module and a narrow bezel design. This new product will be officially released on April 8.

What’s the best browser for Android TV? 5 best apps in the ranking

You can use your Android TV to stream TV shows and movies from services like Netflix and Amazon Prime Video, view locally...
Read more

How to cancel Twitch Prime

How to keep the name invisible in Among Us

Have you seen any "unnamed" players in Among Us' rooms and matches? Invisible name, blank name, no name - call it what you...
Read more

How to check Airtel Number

Not everyone who owns a smartphone and a SIM card know their Airtel phone number. So if you have forgotten your Airtel...
Read more
Load more

Xbox Series X and S will have Netflix, Crunchyroll and more...

Apple sells iPhone 12 in two boxes to include headphones in...

How to check Airtel Number

What’s the best browser for Android TV? 5 best apps in...