Best Android Apps that are not on PlayStore 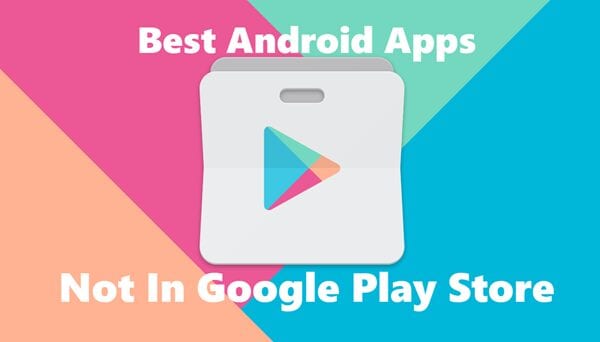 Almost everyone who owns an Android phone download their apps off the Google PlayStore, it is a very common practice. However, there are still a ton of amazing Android apps that are not on the PlayStore that you never knew about since a lot of them aren’t that popular.

Today, I’ll be lisiting some of those apps. Obviously, there are some apps on the web that have malware so if you are ever looking to download an Android app that isn’t on the PlayStore, just be very careful.

The apps that I’m about to list are completely safe and most of them can be found on F-Droid or XDA labs or APKMirror. Those are alternative Android app stores that are well respected in the Android community. So let’s go

The first non-PlayStore app is a screenshot editor called HiShoot2i.

This app lets you play screenshots into smartphone frames, but it takes it a step further by allowing anyone to create a template. Most of the templates can be found on a telegram channel called Hishoot templates. You basically go on the channel, scroll through until you find a screenshot template that you like, then you download the APK that is right below it. Once installed, open the Hishoot2i app and you can find the templates by tapping the gallery icon and then default. From there you just select the template that you downloaded, go back and then you can add a screenshot within the device frame by tapping the plus icon and then for a screenshot and then you can find the screenshot within your files.

You can also edit the background, shadow, frame, glare and badge.

Once you’re done, you can save the image and upload it to wherever you’d like.

There are other apps in the place for that functions similarly, but none of them take it to this level.

Moving on, one of the most annoying things within free applications or web sites are intrusive ads.

I have nothing against developers trying to make money off their apps, games or web sites, but there are a few that take it too far. I’m talking about free games that have non-skipable video ads on every other level, and they charge a lot just to remove the ads with no extra features, Articles that have auto playing video ads with sound, full-screen scrollover Ads, Pop-up Ads and finally, free applications that place large sticky ads in the worst possible spots. So, there is this great adblocker that not only blocks intrusive ads, but also stops trackers and doesn’t require root. Sound’s good right the app is called Blokada, in my opinion, is arguably one of the best ad blockers, and it is open sourced.

When you download it at F Droid, you just toggle it on and it will create a VPN interface to block ads across all your apps and browser.

You can also choose from a list of recommended hosts to block ads for those technical users all traffic will be filtered by the BPL connection and it will only allow queries for hosts that are not black listed. On top of that Blokada allows you to change the DNS service on your phone. The app contains some popular DNS service to choose from or you can add your own.

And lastly, it have a feature called Blokada Tunnel which encrypt your data, hide your IP address and mocks your location. However, that feature does cost $6/month. Like I said previously, it’s one of the best ad blockers. However, if you like an alternative, I recommend DNS66 but I did find Blokada to be more battery efficient and it has a few more features.

Next up is a chromium based browser that is focused on enhancing your privacy as you surf the web and also includes an ad blocker.

It has a native adblock engine with filters from Easy List, you block origin, etc. And as I said before, it has more privacy settings such as support for DNS over HTTPS, which should significantly increase your user privacy since your DNS query will have an encrypted connection and you will also have higher security sensitive, better protect you against men in the middle attacks.

Google Chrome does have this feature, but it’s disable by default on the flags page plus Bromite lets you use other third party hosts that are not just Google such as CloudBear, Ad Guard, Quad 9 etc. On top of that, Bromite automatically removes click tracking. It has anti-fingerprinting mitigations. You can have links always open auotmatically in incognito mode and it has a ton of privacy and security patches from other popular third party browsers such as Brave or Iridium.

That is just the tip of the iceberg. There are so many under the hood changes or features that I didn’t talk about that enhance your privacy and security in this browser. I know it is a lot to take in and some of this context might be confusing, but if you really do care about your privacy, then this is a browser that you may want to get behind.

Viper4Android has been around since the golden days of brooding and it is still going strong for those who don’t know what Viper4Android for Android is, it’s a tool that will enhance your smartphones audio no matter if you are using headphones, the phone speakers, a USB connection or a Bluetooth device, you can modify the sound to the extreme.

For example, if your wireless headphones don’t provide that much bass, you can increase the bass frequency and gain. You can also make the sound even louder if your headphones don’t get that loud. If you want surround sound, then you got it. There is also a compressor, an equalizer, an amplifier, etc.

It’s a berry feature packed sound app. There are even some options that I have no idea what they do. But for an audio file, this app is gold.

I definitely recommend it.

The only catch is that it requires a root to work because it modifies the sound drivers on your phone. The latest version is on XDA labs, so I wouldn’t recommend downloading it off majeste manager because you’ll obtain an older version.

Actually, this is not an APK, but a progressive web app called AppScope, and it is a marketplace filled with web based apps that you can download.

For those of you who are not aware, web based apps mimic the same functionality of regular native apps, but they take up less storage space on your phone.

So since the apps are small in size, they are pretty good alternatives for installing apps you barely use, for example, Instagram has an app size of 84MB, but under PWA version it is just using the Google Chrome app as the base and you can do most of the same things that you were able to do on the regular Instagram app so you could think of AppScope as the app store for progressive web apps.

Once you open it,

Other sites perform a similar function to AppScope but none do it quite so well.

The last app on this list is Lawnchair 2 (Pre-Alpha.

Yeah, I know this app is already on the PlayStore and it is very popular. However, if you downloaded it off the PlayStore, then you don’t have all the latest features, I mean, the last time the beta version was updated on the PlayStore was back in December of 2019.

The truth is that the developers are still updating it on APKMirror.com and they are call these versions pre-alpha APKs.

Obviously, you may experience a few bugs if you use the pre-alpha version but if you do encounter a huge flaw, then you can just refer back to the previous version.

The difference between the beta version of Lawnchair 2 and the pre-alpha version aren’t that much besides the fact that the pre-alpha version has a ton more under the hood changes and fixes, it also has preview pages in the settings for when you tap on the icon grid or you are trying to change the number of icons allowed on the dock, it makes it really easy to change the icon layer on your home screen within the desktop menu. It also shows you how your icons on the desktop will look. So if you want to modify the text size, icon, size, color, etc. those changes can be seen live immediately within this page.

Unfortunately, the Pre-alpha version has removed the app actions preferences in the app drawer. There are a few extra feature flags in the Pre-alpha version. Indie developer options on the app settings. And finally, if you are rooted running Android 10 and would like to use quick switch to enable the recent page with the addition of the dock, then you will need to install the lawnchair to pre-alpha version since the one from the PlayStore doesn’t support quick switch.

So if you were wondering why Lawnchair 2 hasn’t been updated in a while, now you know why.

Either way, those are the best Android apps that are not in the Google PlayStore.