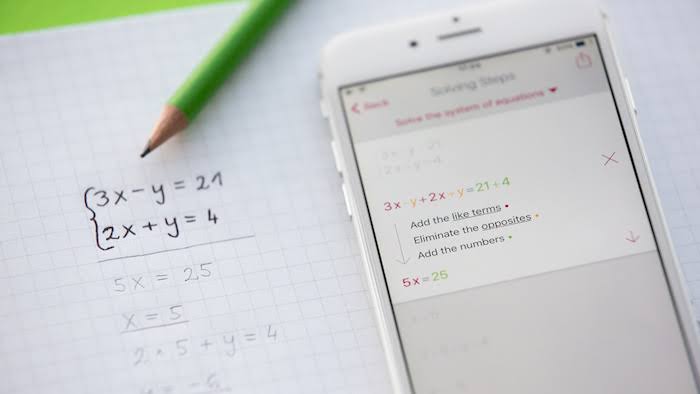 Math apps can be useful for everyday tasks or for studying to pass tests, for example. Therefore, together we have listed a series of Maths Solver apps available on the Google Play Store and the App Store that assist in the study and learning of the subject, including with interactive content.

This is the case with PhotoMath, which takes pictures of the Maths problem and indicates how they are solved, or the King of Mathematics, which turns mathematical operations into an addictive game. But the Wolfram Alpha is an interesting alternative for those who work in the areas of Exact. Check below the list of math apps for Android and iPhone (iOS) that may be useful for you.

PhotoMath is an application that solves math problems and displays the answer in a matter of seconds without having to enter the operation. The app scans the math problems and also recognizes handwritten numbers and letters, offering a detailed step by step on how to get to the solution.

Available for free on the App Store and Google Play, the application also provides graphs for the user to view the equations. More than just providing answers, PhotoMath promises to help the user understand each step of the solution, being a very useful tool for students who need extra help with math tasks. Therefore, it’s definitely one of the best math solver app.

The Socratic is a kind of tutor to a touch away. Despite focusing mainly on mathematics, the application, free for Android and iOS operating systems, also offers support for other subjects, such as Chemistry, Biology, History and English, among others. To use it, you can use the keyboard to type a mathematical question or operation, or simply take a picture.

The app has an artificial intelligence system that “reads”, understands the question, and, in a few seconds, shows the answer, indicating a step by step how it was solved. In some accounts, the application gives tips that can help the user to better understand how the result was reached. You can also find the best Chemistry apps here.

With a simple and intuitive interface, MyScript Calculator is a math application that provides answers to operations of different levels of complexity, being useful both in the day-to-day of those who need to fraction the ingredients of a recipe, and for students. Available for Android and iPhone (iOS), the app is paid, and costs, respectively, R $ 10.99 and R $ 10.90.

In practice, the application converts the user’s handwriting into mathematical operations, eliminating the use of the numeric keypad and transforming the cell phone screen into a sheet of paper that solves bills by the user. The app also allows you to save the results in memory, in addition to having a history, from which it is possible to retrieve all calculations for reuse or export.

If the goal is to make mathematical reasoning faster, the proposal of the King of Mathematics is to do it in an interactive way, in an application that gamifies learning. In the free version, the app offers addition, subtraction and combined operations. In the full option, which costs R $ 14.90, the user has access to the challenges of multiplication, division, arithmetic, geometry, fractions, powers, statistics and equations.

Every player starts out as a farmer and, as he settles the score, earns points in order to reach the level of king or queen. The degree of difficulty of operations increases according to the level of the player, who needs to respond more and more quickly. The application also has a social network, which allows players to compare their scores. The app can be found on both Google Play and the App Store.

First released for Windows Phone, Wolfram Alpha is available to buy on the App Store and Google Play with prices of R $ 10.90 and R $ 10.99, respectively. More than an application that helps to solve math questions, the app combines algorithms, artificial intelligence and an extensive database to search for answers to questions related to science, technology, society, culture, everyday life and mathematics.

The application has a simple interface, being indicated for those who need to solve problems and equations – including in areas related to mathematics, such as physics and chemistry – and need to have the results at hand to make the conference. Another feature of the app is that it offers step-by-step resolution of operations, in addition to graphics that help to visualize information.

Mathaway uses his smartphone’s built-in camera to decipher and solve math problems. You just have to point the camera at a paper or whiteboard and click on a photo. Mathaway will begin to work her magic.

There is also the option of entering the problem manually using the keyboard. It comes with a scientific calculator to help you enter and recreate complex problems.

Where Mathaway really shines is in his ability to provide a step-by-step explanation for each answer and how it was derived. There is also support for statistics and trigonometry.

The app is free and ad supported, but if you want to see the steps with detailed explanations, you will have to upgrade for $18.49 / m.

MalMath is a good math solving app for students who are studying both in school and in universities. You can use it to solve algebra, trigonometry, logarithms, equations, and derivatives. It will show you the steps to follow.

If you want to practice a bit, the application can generate example problems, with solutions. There is also support for some foreign languages.

What I didn’t like about the app was the design of its calculator. Most of us grew up using a straight line instead of a keyboard. This delayed me.

You can save your calculations for future reference. MalMath is a free application that comes without any advertising.

Depending on your preference, you will be presented with math problems that you will need to solve. You will receive points for each correct answer and the one with the most points will win.

What’s cool is that the app will teach you some great tricks too. You know those math tricks that allow you to calculate difficult-looking problems without even writing them down somewhere? Yes, those guys;

A mathematical application dedicated to the art of graphics. While there are other math apps that will allow you to solve graphing problems, MathAlly makes it more interesting. It comes with a ton of settings and options like the ability to create your own keyboard. Yes, that can be useful if you are not happy with the one that comes by default.

You can also create your own custom keys for functions and expressions and add them to your custom keyboard. There is a full screen mode that hides the status bar, which is useful if you are working on a smaller screen or do not want to be disturbed by WhatsApp messages.

There is support for parametric and Cartesian graphics mode with workspaces to solve your work.

I like open source software and applications, which is why Calculator N + has made this list of math solver applications. It can handle a number of problems such as algebra, trigonometry, statistics, and analysis. There is graphics support and it has a built-in unit converter.

What is missing are the steps and explanation behind the solution that other apps show. On the plus side, there are no ads and in-app purchases. So I guess you do get what you pay for after all.

With this list of math apps, you can now solve virtually every math problem that comes your way.

How to Migrate to MTN Biz Class and Send free SMS

How to Make a QR Code