Multiple platforms; learn how to download Genshin Impact and what are the minimum and recommended requirements on PC and mobile 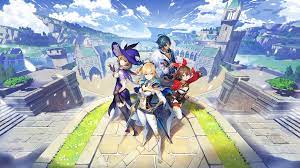 Genshin Impact is a free RPG that burst on PS4, iOS, Android and PC some time ago, causing a big uproar around the world. See below how to download Genshin Impact and what are the minimum and recommended requirements to run the miHoYo game smoothly on PC or smartphones. The game is available for PS4, PC, iOS and Android and offers freedom of movement on all platforms.

What is Genshin Impact?

Genshin Impact is a game developed by Chinese developer miHoYo. It is an action RPG and open world, with free exploration and offering a huge map, plus various missions and challenges to the player.

The game is similar to The Legend of Zelda: Breath of the Wild, with freedom of movement and real-time combat. The control is done with one team character at a time, but one can switch between them, with the aim of performing combos of spells.

The action RPG game features beautiful graphics and gameplay full of effects. For this reason, it is important to keep an eye on the minimum and recommended settings, avoiding getting nervous with possible slowness. On PC, the game is only available for the Windows system.

To download the game Genshin Impact on PC, the best way is directly on the official website of the game producer, miHoYo. Just access the page, register, download the executable, do the guided installation and start your adventures.

The game in the mobile version is available for Android and iOS systems. When we think of Android devices, some settings are considered minimal for the game to run efficiently.

For Apple devices, the only requirement for Genshin Impact is that the system must be iOS 9 or higher. The devices that support the game are:

On both systems, games can be found in their respective app stores, Google Play Store (Android) and App Store (iOS). Simply download, register and start playing Genshin Impact as shown above.

For the PS4 and PS5 it is quieter to download the game, since there is no need for upgrades to meet minimum requirements. Attention should be made only to the requirement of 30 GB of space released within the console.

With this information it has become more relaxed to know how to download Genshin Impact, in addition to setting the minimum settings necessary for a good development of gameplay in the game. The game is free and is well worth strolling through the magical adventures of this universe. Good luck.