Mi TV Stick and Mi Box S are set-top boxes from Xiaomi, which run Android TV; find out what are the main differences between them 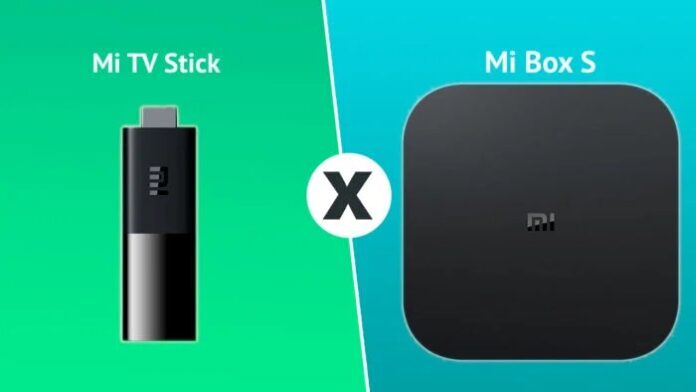 The Mi TV Stick and Mi Box S are two set-top boxes from Xiaomi , devices that run Android TV compatible with Chromecast, which supports a large amount of apps when connected to a TV, however, they have very different features. Find out the differences between them and decide which one is best for you, whether the Mi TV Stick or Mi Box S.

The Mi Box S is a traditional set-top box, a box to be positioned on the shelf. The Mi TV Stick is a dongle, like Google Chromecast, a usb stick-shaped device that is hidden behind the TV.

The Mi TV Stick is much smaller than the Mi Box S, much lighter (28.5 g versus 147 g) and does not require the use of an HDMI cable,which makes it an easier device to carry.

The remote control is the same on both devices. Small and compact, it brings a ring that are the navigation arrows and a button in the middle, to confirm. Below there are the default buttons of an Android TV, Menu, Back and Home device.

Above, there is the Power button and the Google Assistant button and at the bottom, the volume controls.

The difference between the templates is in the buttons dedicated to other services. The Mi Box S brings one to Netflix and one to cable TV, while the Mi TV Stick replaces the second one with one for Amazon Prime Video.

As pay TV users have a dedicated control, the button on the Mi Box S is not as useful, so much so that Xiaomi dismissed it in the new dongle.

The Mi TV Stick has an HDMI port, to be connected to the TV, and a microUSB for power. The user can choose to use power from the TV itself, sticking the cable into an available port, or use the source and enable features such as HDMI-CEC, which allow connecting the TV with the remote control.

The Mi Box S depends on the power source and an HDMI cable, but brings more ports. There is also a USB port for memory expansion or file transfer, and a P2 audio output, to connect the sound to an external system. In the end, it offers more usage options.

The Mi Box S comes out of the box running Android 8.1 Oreo, but has an update to Android 9 Pie, which already comes from the factory on the Mi TV Stick. However, once both are in the same version of the AS, the differences disappear.

Android TV has a huge selection of apps, almost all that run on Android phones, except for specific solutions and some games, and there are titles that also run on TVs, dongles and set-top boxes compatible.

Google Assistant offers voice command features to open apps, check weather, play content, and so on. On the app side, you can run Netflix, Prime Video, YouTube, Spotify, Deezer, Twitch, Crunchyroll, Disney+ and many others on both gadgets, and compatible games can be enjoyed, with support for dedicated Bluetooth controls.

Finally, Android TV brings the Chromecast function, which allows you to mirror mobile content and run compatible apps and games on devices, without installing anything.

Winner: draw (with both running Android 9)

Here the differences are deeper. Mi Box S supports resolutions of up to 4K, while mi TV Stick is limited to Full HD. Both are able to play videos at up to 60 frames per second (FPS).

The supported video technologies are similar. Both support CODECS VP9 and H.264, but the Mi TV Stick also supports the latest H.265. On the other hand it has no HDR, while the Mi Box S is compatible with HDR10.

For those who own a Full HD TV, having 4K support is not as essential, but things change with a 4K screen, where the Mi TV Stick loses by having a lower limit resolution.

Briefly, Mi TV Stick and Mi Box S support the same audio formats, with no differences in this.

Although the GPU of both is the same, the Mali-450 is faster on the Mi TV Stick. On the other hand, the Amlogic S805Y processor supports resolutions of up to 2K, but Xiaomi has chosen to limit the gadget to 1080p.

The amount of RAM in the Mi TV Stick is half that present in the Mi Box S. Internal storage is the same in both, however, the Mi Box S supports expansion via USB port.

Although the Mi Box S has a higher resolution, which justifies its price, the Mi TV Stick is arguably cheaper.

Which one’s the best? You decide

Both devices closed the comparison with 5 points, each with advantages and disadvantages when placed front to front. However, Mi TV Stick and Mi Box S have fundamental differences because of their ability, and are targeted at different consumer profiles.

So it’s up to you to decide which one best suits you. Our recommendations are as follows:

For owners of 4K TVs with older systems, who would like to use Android TV, Mi Box S is the best option. Compact and discreet, it takes up little space and offers a lot of compatible apps, with support at 2160p, 60 fps and HDR10.

In addition, you can expand the internal space through the USB port, for those who want to install more apps and games.

The Mi TV Stick, in turn, is suitable for those who have a Full HD TV, especially the older ones with legacy systems, which are no longer updated, receive no news or simply aged badly.

It’s also an excellent option for turning even older non-smart TVs into smart devices, giving that device a survival that you don’t want to dispense with. And because it is small and light, the Mi TV Stick is not visible on the shelf and can be easily transported.