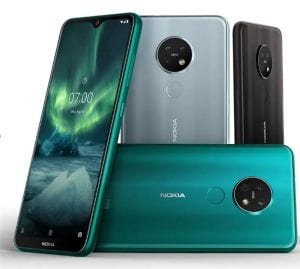 HMD officially released the Nokia 7.2 phone at last year’s IFA 2019. At the beginning of the release, this phone runs Android 9 system.

According to foreign media pricebaba, the device received the latest Android 10 update six months after its release. Nokia 7.2 has finally joined the ranks of mobile phones running Android 10.

Just like software updates, update pushes are done in batches, so users may need to wait a few days before they receive an update notification on their device, or manually check for updates in Settings> System.

Mobile phones Manufacturers are testing the Snapdragon 875 + 100W fast charge, which will be commercialized next year

January 18, 2020 0
Flud is a simple and beautiful BitTorrent client for Android. The power of BitTorrent protocol is now in the palm of your hands. Share...

How to Change Background of any Photo in Five Seconds Without...

Infinix Hot 9 announced with Mediatek A25 and 5000mAh battery