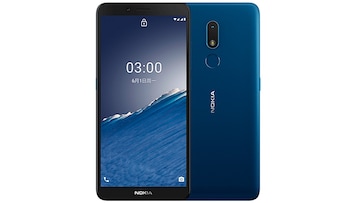 HMD Global announced on Tuesday (25) its newest cheap smartphone: it is the Nokia C3 with almost 6 inches screen, digital reader, support FM radio and up to 3 GB of RAM. This smartphone runs the full version of Android 10, while its predecessors were launched with Android Go.

Cheap cell phone manufacturers tend to save on RAM, but HMD broke that standard and decided to create models with 3 GB of memory. Unfortunately, these versions will only be available in China and India; for the rest of the world, including Latin America, the Nokia C3 will come with 2 GB of RAM.

Inside, we also have a Unisoc processor with eight 1.6 GHz cores, up to 32 GB of microSD expandable storage and a 3,040 mAh battery.

The rear camera is 8 megapixels and is close to the fingerprint reader; while the front camera for selfies features a 5 MP sensor. There is also a button for direct access to the Google Assistant.

How does the Nokia C3 compare to its latest predecessor, the Nokia C2?

HMD implemented several small improvements: the processor is a little faster, the battery has gotten a little bigger and the amount of RAM has increased, as well as the megapixels at the rear.

The Nokia C1 and C2, launched in the last twelve months, do not have a fingerprint reader and run Android Go; both have only 1 GB of RAM.

It will reach selected markets in September, in blue and gold colors, costing around 85 euros on average.

George Philiphttps://www.betechwise.com
George is a technology content writer with few years of experience. Specialized in mobile devices, personal computers and consumer technology, as well as software and applications. He explains all technological concepts so that users with less knowledge can understand it. If not writing, you may find him engrossed playing action games on his smartphone. Just so you know, he loves Xiaomi products alot. You may contact him via his email - georgephilip20[email protected]