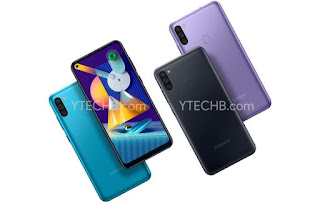 Samsung Galaxy M11 uses a punched screen design in the upper left corner, rear fingerprint recognition and vertical three-shot. This also means that M11 is expected to become Samsung’s cheapest punch-screen mobile phone, after all, M11 belongs to the entry-level model of Samsung mobile phone family.
The release date has not been known yet but Galaxy M11 is expected to be released soon to the market.

For the camera, the Samsung Galaxy M11 has a front 8MP selfie camera (f/2.0) in a punch-hole design. A rear 13MP main camera (f/1.8) + 5MP Ultra Wide camera (f/2.2) + 2MP depth camera (f/2.4) triple camera combination, and a flash is located on the right side of the camera module.
Other features of the front camera will be Live focus mode for bokeh effect which will blur the background. We get to know the edge detection and all once the phone is available.
The Samsung Galaxy M11 is a low budget phone so you don’t expect much from the camera.

In terms of processor, the Samsung Galaxy M11 will be equipped with a 1.8GHz octa-core processor. The specific model is unclear. It is equipped with 3GB / 4GB memory and 32GB / 64GB body storage. It supports up to 512GB external MicroSD expansion. 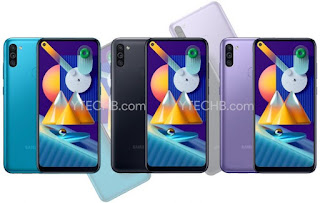 It has a built-in 5000mAh battery and supports 15W fast charging.
Galaxy M11 will also come with Android 10 based OneUI 2.0 OS running out of the box. Other features on Galaxy M11 includes Type-C port, 3.5mm headphone jack, Bluetooth v4.2. It will also have a face unlock feature along with a Fingerprint scanner.
That’s all on the Galaxy M11 official specifications and official press renders which show the design and color variant of the phone.
Join Our Telegram Channel

April 16, 2020 0
This month of April, I'll be listing some applications that might probably be worthwhile to you. Since we all are in lockdown,...