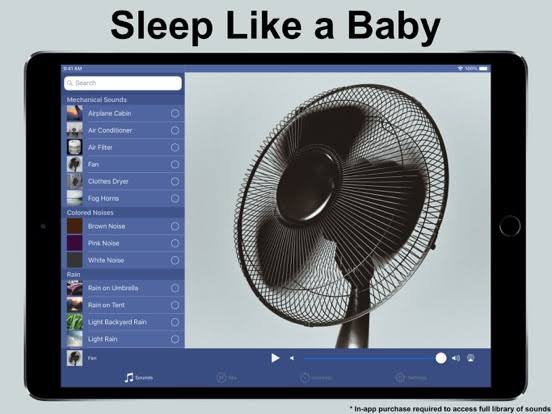 Just as white light is composed of all visible wavelengths in the color spectrum, white noise gathers all the frequencies audible by human ears. When the theme is associated with people’s habits at bedtime, the benefits of white noise divide the opinions of health professionals. Understand what white noise is in more detail and what the possible effects on your sleep are—such a sacred moment.

What is white noise?

According to the Sleep Foundation, an American foundation that studies sleep-related phenomena and disorders, when measuring sound waves, two terms stand out: frequency (Hz) and amplitude (dB). In simple language, the frequency concerns how fast the waves oscillate per second. Meanwhile, amplitude refers to the (vertical) size of the wave.

Following the explanation, the sound waves and those that make up the visible spectrum of colors share structural properties. That is, the name white noise refers to the “behavior” of white light— which is the combination of all wavelengths of colors that can be visualized by human eyes. At this point, it is worth noting that when we see a white object, it means that all colors that focus on the item are reflected.

App Features You Need to Include in Your Mobile App

Thus, white noise is the auditory equivalent of white light. A combination of all the frequencies that can be heard by human ears. It is common to associate this resulting noise with the sound emitted by a radio when it is not tuned.

How can white noise affect sleep?

When we notice habits that precede sleep, it’s not hard to find people who use apps to help with the process. As an example, apps that reproduce the noise of rain or sea waves and consequently generate a relaxing effect on the mind and body.

In this context, there are also apps that promise to reproduce white noise, which acts by masking the other sounds of the place. The importance of disguising other sounds lies in the fact that, commonly, what makes someone wake up (or can’t sleep) are sudden variations or interferences in ambient sound. Like the sound of a door slamming or the horns of cars on a busy street.

There are also studies that point to the positive effects of white noise in hospital environments — especially in intensive care units (ICU). The technique is used to mask, for example, the sounds emitted by the section equipment itself. As a result, there is an improvement in the quality of sleep in some patients.

Not all hypotheses are positive in relation to the use of white noise. In an article in CNN Health, it is noted that during sleep the brain is actively working on repairing and restoring the body, in addition to being attentive to the sounds of the environment. Maintaining a noise throughout the night means keeping the brain in a constant process of perception and analysis of these sound signals.

From this is the question: is it possible that the continuous action of sound signal analysis significantly takes away the focus of the repair work done by the brain during sleep?

Another point highlighted by experts is the possible psychological effect of using sleeping sounds. By developing a “ritual,” you can condition your mind to believe that using the app is essential to being able to fall asleep—and get anxious if the feature isn’t available. For some people, then, this type of app can be positive only in cases where you need to disguise external noises.

Apparently, there are still few scientific studies on the subject to support the statement that it is, in fact, beneficial or not the action of white noise. It is also worth remembering that each organism can react differently to the stimulus.

So if you’re on the team that prefers to sleep with some constant noise in the environment or want to test white noise to mask external sounds, the list below has app suggestions. Check!

In addition to white noise, apps offer other types of relaxing sounds. Tools to set up usage time and make a mix of sounds can also collaborate with your relax moment.

With information from: Sleep Foundation, JCS, CNN Health and Time.

How to Reset Software Trial and Use it Forever for Free